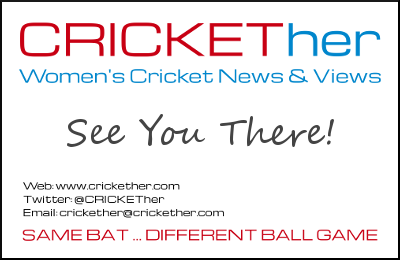 For all the latest Women's Cricket News & Views!

With the sacking of Paul Downton, there's been a lot of talk in the papers about what this means for English cricket... or rather, for English MEN'S cricket. But what about (ahem...) PROPER cricket?

Women's cricket remains a low priority for the mainstream media; some way behind men's international cricket, which is probably fair given levels of interest and attendance; but also behind men's domestic cricket, which is arguably a much closer-run thing - women's international crowds in England have recently been significantly larger than the average men's county gate.

But Downton's replacement really matters for women's cricket. Whoever it is, we KNOW they will be passionate about men's Test cricket; and we KNOW they will likely be deeply invested in men's domestic cricket, given that all the mooted candidates are ex (men's) pros.

But will they really care about the women's game?

When it comes to the difficult financial calls, will they push for additional budgets to be directed at England women... or to the equally-struggling men's counties?

When they appoint committees, will women's cricket be fairly and equally represented?

These are the questions that need asking from the perspective of the women's game; but will they be?

"Jumpers For Goalposts" In UAE

England Academy are now two games into their battle with Australia's Shooting Stars in Dubai; and having seen the first game postponed due to a sandstorm, the England girls were no doubt delighted to take to the field on Friday and Saturday, in contests where the batsmen in particular might reasonably be hoping to be pushing for places in the Women's Ashes squad.

But the reality is that these two games have so far told us very little... not least because THEY HAVEN'T BEEN PROPER "REGULATION" MATCHES!

In the first game, England were bowled out after 44 overs; but batted on "off the scorecard"; and in the second match, England used 13 players; with the Shooting Stars having done similarly.

I can't help but feel that staging matches under these "Jumpers For Goalposts" playing conditions isn't ultimately very helpful; and is certainly scant preparation for the high-pressure cauldron of an ODI or Test innings or spell with The Women's Ashes at stake!

I'm sure the coaching teams "have their reasons" and these matches still have some significance... although probably not the significance captain Tammy Beaumont would hope, with the likes of Elwiss and Wilson perhaps coming into the England reckoning at her expense. But I do hope that this doesn't become the rule for Academy tours in future.
Posted by Syd at 17:53 No comments:

"We are very excited about our new line of B.a.L.L.S. headbands; and as an enthusiastic wearer of headbands herself, Izzy would be a perfect fit for B.a.L.L.S."

He went on to say:

"B.a.L.L.S. come in a variety of team colours, including Middlesex Pink; and we think it would be fantastic to see a player like Izzy wearing pink B.a.L.L.S. on her head!"

With 2 rounds now completed in the ICC Women's International Championship, one particular pattern stands out - home advantage appears to be a significant factor in women's international cricket.

But the anecdotal evidence is also supported by the stats.

Overall, the home side has won over 70% of the 27 ODIs played, while the away side has won just 22%, with a couple of "No Results" making up the numbers.

England will be hoping the model persists this August against the Southern Stars; but if there's one stat that stands out above even home-field advantage, it's this one:

It is going to be an interesting summer!
Posted by Syd at 18:52 1 comment:

Cricket Australia have announced that Matthew Mott will succeed Cathryn Fitzpatrick as Southern Stars coach for this summer's Women's Ashes in England and beyond.

Mott played men's state cricket in Australia as a middle-order batsman, before embarking on a coaching career in men's cricket which saw him spend 3 seasons at the helm of Glamorgan men in the English* county game; and he has also worked internationally with Ireland men.

He now inherits a women's team which is currently on top of the world and likely to stay there; but it will be interesting to see how he adapts from The Other Game, and if he can bring anything new to the smorgasbord of women's cricket.

After several years at Wokingham, Berkshire are on the move this season - playing their home games at North Maidenhead and Finchamstead, where more of an intimate village atmosphere will prevail. (Finchamstead in particular is a long way from any public transport links, so if anyone attending matches there needs a lift from the nearest station at Wokingham, let me know!)

The big news for Berks though is the return of Alex Blackwell, who played for The Beavers for one summer in the late 00s. In the intervening years, Blackwell has become something of a bona fide superstar, as well as being an outspoken activist for gay rights; so she'll be a huge asset, although obviously only for the first part of the season before she joins up with the Southern Stars for the Women's Ashes.

One final titbit... Isa Guha is apparently once again officially in the squad - she has only played four matches in the past three years; but as I've speculated before, she may be keeping her eye in for a possible return as she is an obvious candidate to "player-manager" a WICL franchise, should that enterprise come to fruition!
Posted by Syd at 07:44 No comments: